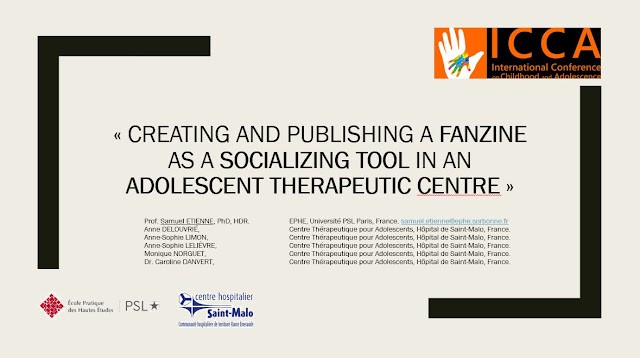 Title: Creating and publishing a fanzine as a socializing tool in an adolescent therapeutic centre

Abstract: Fanzines are do-it-yourself magazines published by amateurs. They are non-profit, non-professional and small-circulation journals that originated in the 1930’s where science-fiction fans started to publish fanclub correspondence (Atton, 2002). Since then, fanzines have hybridized and have become numerous and very diverse in the cultural and leisure spaces from science-fiction to popular music, sports or contemporary art (Etienne, 2016). Beyond the diversity of their centres of interest, they share an unconventional facture, a spontaneous and strongly personal identity (Wertham, 1973). Here, we present the first results of some weekly fanzine workshops conducted during 9 months with 9 adolescents in a therapeutic centre, located in a public hospital in France. Each patient, 10 to 15 years-old, participate on a voluntary basis. Fanzine production was based on writing, drawing, editing where patients, medical staff and artist-researcher (the author) act conjointly. Publication themes were chosen on a consensus basis following declaration of interest of each patient at the beginning of the workshop. Publication of 4 fanzines were achieved within 5 months (fig. 1). Workshops generated new interactions between adolescents, positive ones that were not observed before by the medical staff. Several copies of the fanzines were given to each participant allowing a circulation of the fanzine outside the medical space. The act of publishing the outcomes of the workshops outside the therapeutic space is positively perceived by adolescents generating a pride feeling, recognition by the readers and -during the workshop period- a solid source of motivation to finish the magazine. Fanzine publishing offers similar opportunities to journal writing (Thompson, 2004) but its circulation avoids the narcissistic trap. We suggest that fanzine publishing could be used as a socializing tool that enhance personal motivation and social interactions.