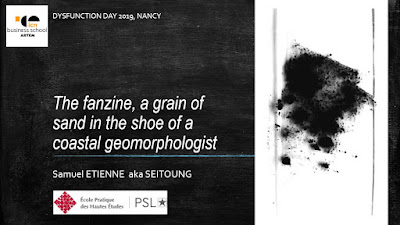 The presentation is about the influence of a mundane media, i.e. do-it-yourself fanzine, on the dysfunctional evolution of an academic earth scientist. It will show how a long-lasting hobby transformed the rational and objective study of landscapes into the production of abstract artworks. The first part of the presentation is autobiographic. Samuel Etienne is also known as Seitoung (and other heteronyms), a zinester since his 14th. Seitoung[i] contributes to or publishes dozens of DIY fanzines since the 1980’s, most of these publications being considered a hobby without link with his professional academic career. However, in 1998, he founded a non-profit association publishing books on popular music (Editions Melanie Seteun[ii]) where, in 2002, he co-founded the peer-review Volume! conceived as a “scientific fanzine on popular music”. This is when the fanzine hobby started to cross the academic career. This is when the dysfunction begins. This is the sand grain which, falsifying all sedimentological rules, will steadily grow as big as a boulder instead of disappearing like silty dust. Gradually caught up with his double life, Samuel Etienne abandoned his geomorphologist career in 2018 to dedicate his full research time on fanzines. The symbolic act of burial was the publication of BOULDERS[iii], an artzine exploring the use of boulders in contemporary art. The first three issues were dedicated to his own science leftovers, i.e. scientific material, namely coastal boulders, collected during his geomorphologist career but never used or valorised in academic publication. In the meantime, Samuel Etienne/Seitoung moved from the scientific study of landscapes (sedimentological archives) to the production of conceptual artworks (from canvas to objects and artzines) focussing on the memory and overconsumption of landscapes (“payscaments”[iv]). He also explores the museum dimension of fanzines through the production of zinewall[v], giant but ephemeral installation made of photocopies, reprints, collages of forgotten fanzines. Then, his scientific research outcomes have now moved from classic research papers towards an artistic production where (earth) science (i.e. an objective knowledge of the natural space) is formally dissolved into art (i.e. a subjective representation of the environment).
[i] www.seitoung.fr
[ii] www.seteun.net
[iii] http://strandflat.fr/etiquette-produit/boulders/
[iv] http://seitoung.fr/payscaments/
[v] http://seitoung.fr/zinewall/