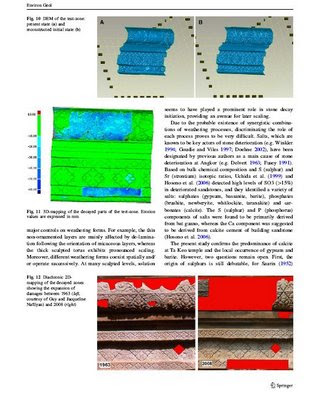 Abstract:
A first application of geomorphological methods to the assessment of sandstone deterioration at Angkor is presented. Damage diagnosis was carried out on the first eastern tier of the central pyramid of the 1,000 year-old Ta Keo temple. Methods combine field observations and
measurements at 230 sampling points, high-resolution lasergrammetry and stereophotogrammetry on a 2-m2 test zone, and SEM observations. The first results indicate that decay operates through a synergistic combination of weathering phenomena dominated by scaling and solution, and exhibits a high spatial variability. Percentages of deteriorated
surfaces vary from 17.6 to 93.8%, and average stone recession values from 0.00 to 2.71 cm (minimum) and 0.34 to 5.49 cm (maximum). On the test-zone, stereophotogrammetry and 3D-mapping of the present and reconstructed initial states using lasergrammetry indicate
that erosion scars up to 6 cm deep have formed since 1963.
On the whole, the amount of deteriorated surfaces more than tripled between 1963 and 2008. The degree of implication of salts in stone decay remains unclear for most efflorescences
are composed of calcite (CaCO3), with secondary importance of barite (BaSO4) and gypsum (CaSO4.2H2O). Future prospects aim to evaluate the impact on stone decay of the clearing out of the temple from the forest in the 1920s.